Both hashing and asymmetrical encryption are involved in the creation of a digital signature, which essentially exists as a message digest that was encrypted by a private key and appended to the original message. The recipient verifies the signature validity by using the corresponding public key to decrypt the digital signature’s encrypted hash, which produces the message digest. The hashing mechanism is applied to the original message to produce the message digest. Identical results from the two different processes indicate that the message maintained its integrity. 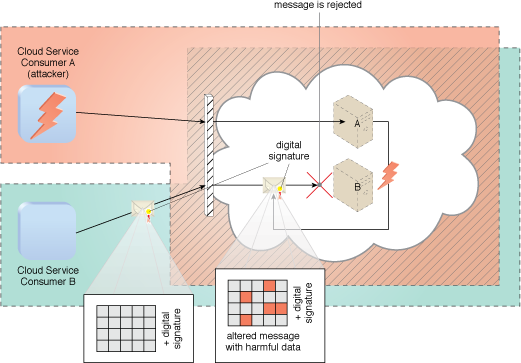 Figure 1 – Cloud Service Consumer B sends a message that was digitally signed but was altered by trusted attacked Cloud Service Consumer A. Virtual Server B is configured to verify digital signatures before processing incoming messages even if they are within its trust boundary. The message is revealed as illegitimate due to its invalid digital signature, and is therefore rejected by Virtual Server B