How can very large amounts of data be processed with maximum throughput?

Data is consolidated in the form of a large dataset and then processed using a distributed processing technique.

For scenarios where a large dataset is not available, data is first amassed into a large dataset. Once a large dataset is available, it is saved into a disk-based storage device that automatically splits the dataset into multiple smaller datasets and then saves them across multiple machines in a cluster. A batch processing engine, such as MapReduce, is then used to process data in a distributed manner. Internally, the batch processing engine processes each sub-dataset individually and in parallel, such that the sub-dataset residing on a certain node is generally processed by the same node. This saves from having to move data to the computation resource. It should be noted that depending upon the availability of processing resources, under certain circumstances, a sub-dataset may need to be moved to a different machine that has available processing resources.

The process of splitting up the large dataset into smaller datasets and distributing them across the cluster is generally accomplished by the application of the Dataset Decomposition pattern. 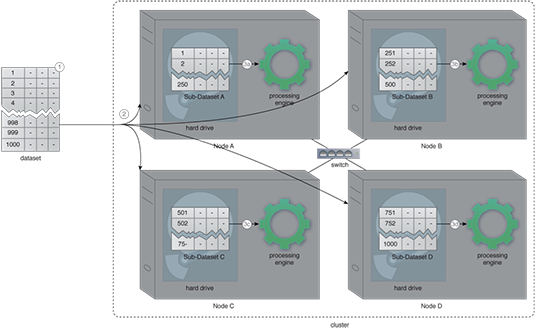