A distributed application that uses Web-based technologies (and generally relies on Web browsers for the presentation of user-interfaces) is typically considered a Web application. These applications can be found in all kinds of cloud-based environments due to their high accessibility.

Figure 1 presents a common architectural abstraction for Web applications that is based on the basic three-tier model. The first tier is called the presentation layer, which represents the user-interface. The middle tier is the application layer that implements application logic, while the third tier is the data layer that is comprised of persistent data stores. 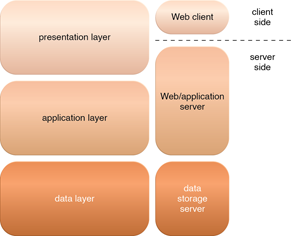