How can large amounts of non-relational data that conforms to a nested structure be stored in a scalable manner so that the data retains its internal structure and sub-sections of a data unit can be accessed?

Storing very large amounts of semi-structured data using traditional database technologies so that individual elements of a data unit can be referenced without performing post-query processing is either not possible because of the inability to parse the structure of the data unit or suffers from scalability issues.

Semi-structured data is stored in a nested form based on a clustered storage technique.

A NoSQL-based Big Data storage technology is used, which stores each data unit as a nested document where not only the complete data unit be accessed via a unique key but also individual sections of the data unit can be accessed.

A document NoSQL database is used to store nested data. Such a database generally uses a hierarchical format, such as JSON, as an internal data storage format. Apart from providing key based access, such a storage device is also capable of selecting sub-units of a data unit along with full create, read, update and delete (CRUD) functionality. API-based access is generally provided by the document NoSQL database for performing the CRUD operations. 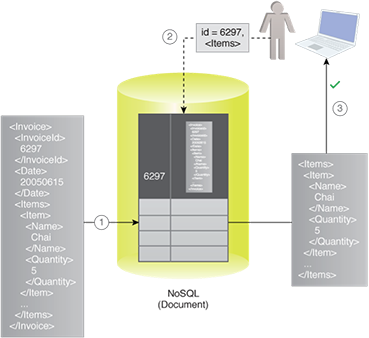 A database based on NoSQL technology is used that is capable of storing data in a hierarchical format and understanding the internal structure of the data. Saving data based on a nested structure further enables relational-like storage such that the related child table records can be embedded inside the parent table record.