How can very large datasets comprising entities that are connected together be stored in a way that enables efficient analysis of such connected entities?

Big Data storage technologies generally employ non-relational, aggregate-based data storage strategies. However, such technologies cannot be used to efficiently store and analyze data that consists of very large groups of entities that are connected together via a logical connection.

A specialized cluster-based storage technology is used that allows specifying connections between entities.

A NoSQL-based Big Data storage technology is used that stores each data unit as a node or a vertex and the logical connection between two vertices as an edge and further enables querying the vertices based on the existence of edges between them.

A graph NoSQL database is used to store linked data. Entities with attributes as key-value pairs are stored as vertices, while the connections between the vertices are stored as edges. Each edge can also contain key-value attributes that can be used fine-tune the query criteria. In order for the database to service link-based queries, the database requires that the edges are explicitly defined between the vertices. 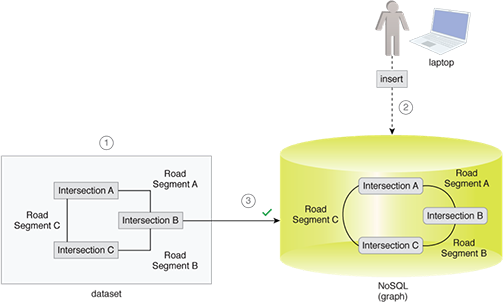 A link-aware storage device is used that not only supports storing very large amount of entities (records) but also provides a means for adding links between the entities. Such a storage device enables finding entities based on a direct or indirect connection between them.