How can complex processing tasks be carried out in a manageable fashion when using contemporary processing techniques?

The complex logic is broken down into a series of steps and executed over multiple processing runs.

As the application of the Complex Logic Decomposition pattern results in the creation of multiple processing routines, modifications to any of the routines need to be properly documented because modifications to one routine may change the behavior of the other routine. Based on the functionality supported by the processing engine, the Automated Dataset Execution pattern may need to be applied in order to connect together multiple processing runs. 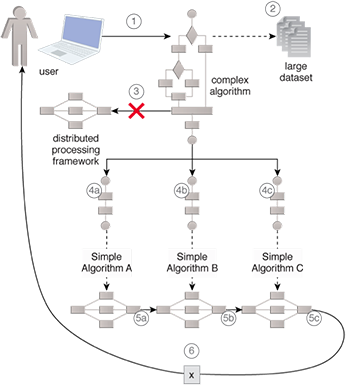 The divide-and-conquer rule is applied by rethinking the complex logic, which needs to be executed as a monolithic task, in terms of combinable multiple smaller tasks where each task executes comparatively simpler logic. These tasks are then chained together to obtain the final output, as envisioned though the use of the original complex logic.