The functional/operational monitor is used to monitor a software program’s functions to ensure that they behave as expected. It can be utilized across testing, staging and production environments and is commonly applied during all post-development stages to ensure that all functions and features remain operational as the developed software is moved from development through to production environments.

The functional/operational monitor can be used during all post-development stages.

The functional/operational monitor can be used to identify developed functions that do not work as expected, or functions that work independently but do not work as expected when combined or integrated with others. The project team is able to access the event database to retrieve information about the status of software functions and features at different stages. Project team members can use this information to collaboratively resolve outstanding issues. 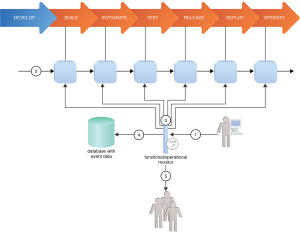 Monitoring conditions are defined alongside actions that must be taken if a function does not work as expected (1). The software component progresses from build through to operation stages (2). The functional/operational monitor actively monitors the component’s functions during all stages (3). The monitoring results are stored in an event database to keep track of how functions work during different stages. If a function stops working, an event is logged in the event database (4). An alert is then sent to notify relevant team members that a function is not working (5).