The continuous testing monitor is a CI/CD mechanism used to monitor different types of testing activity on developed code, and to monitor the testing tools themselves to ensure they are operating as required. It is commonly employed across all pre-operate delivery pipeline stages and across development, testing and staging environments. However, it may also be used in production environments when dark launching is carried out.

The continuous testing monitor can be used across the indicated stages. The testing of developed code is performed until the test stage, after which testing scripts may be used to periodically test how deployment and release tools are performing.

The continuous testing monitor is typically associated with the Cycle Time, Lead Time, Deployment Frequency, Failed Deployments and Application Usage metrics and is responsible for collecting and storing data associated with the results of a range of common tests, including unit tests, integration tests, performance tests, security tests and acceptance tests. Test scripts that carry out tests are commonly designed to send results to the continuous testing monitor. Such test scripts can be manually or programmatically executed. 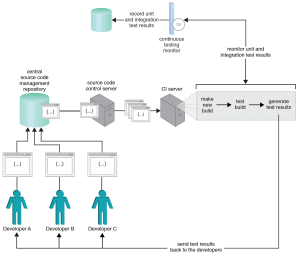 In this scenario, the CI server is making new builds and performing unit and integration tests that are monitored and recorded by the continuous testing monitor.

The data collected by the continuous testing monitor is often used during continuous deployment, by the release management tool as part of its automated determination of whether releases can be approved for deployment into production.