A virtual disk (vDisk) is a specialized variation of the cloud storage device mechanism that exists as a single file or a set of files split into smaller parts that represent the virtual server’s hard disk. A virtual disk is the consolidation of hard drives that are allocated to a virtual server before or after its creation.

Each virtual disk is stored in a single file, or set of files, in the format that is supported by the hypervisor. Virtual hard disk files can be split into smaller parts. Although splitting the files speeds up the relocation process of the virtual server files, the virtual server’s performance tends to be negatively impacted as well.

Figure 1 shows three virtual servers, each of which has two virtual hard disks. A single-file hard disk is used for VM A, hard disks split on VM B and a mixture of both applied to VM C.

Splitting disks can result in performance issues and is not recommended for disks that are larger in size. 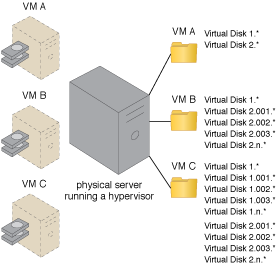 Figure 1 – An example of virtual disks.

The architectural model upon which this design pattern is based is further covered in: