This metric is dedicated to measuring the availability of a software program. Depending on the nature of the software, availability mechanisms may be built into its design or its surrounding technology architecture. Existing infrastructure resources, such as failover or storage replication, may also be utilized to enhance a program’s availability.

Availability is often expressed in percentage values comprised of 9s. For example, 99% (also known as 2 nine) or 99.999% (also known as 5 nine). Sometimes availability is defined by the amount of time that an application is available within a given extended period, such as a day or week.  This time value generally accounts for unplanned outages only. The following table shows examples of different availability levels based on percentage and time.

The availability and uptime of a software program are defined using the following values:

The following figure illustrates how these values relate. 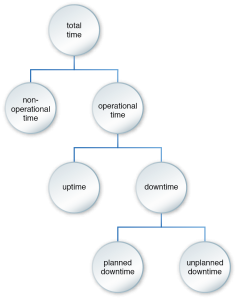 How the values used to calculate availability relate to each other.

The availability of the individual components, services or parts of a greater system can be measured based on either of the following formulas. (The MTBF and MTTR metrics are described later in this section.)